Politics in the Workplace: Managing to Prevent Political Tension at Work 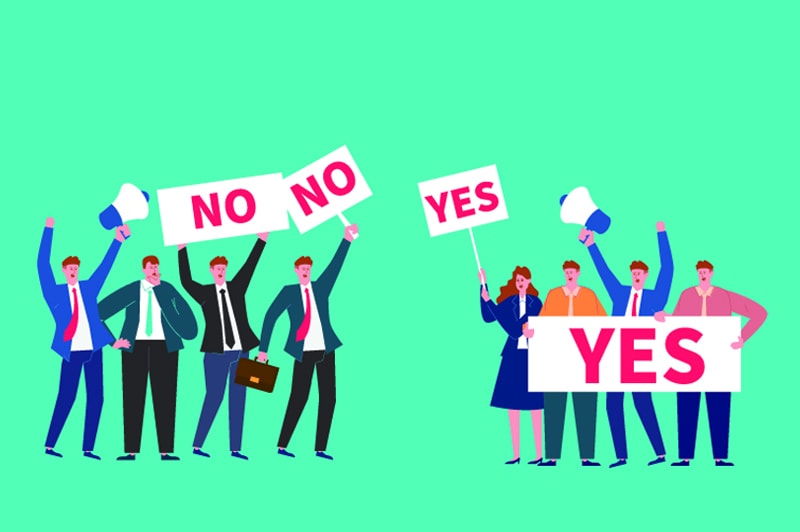 Politics. For generations, it was a dirty word when it came to conversations that were appropriate to have in the workplace.

But, as politicians become increasingly divisive and the nation becomes increasingly split along party lines, political considerations are creeping into every aspect of the lives of American workers. And, in a tense election cycle like the one we find ourselves in right now, it would be unrealistic to think that employers could completely prevent political conversations from taking place at work.

On the contrary, all indications are that political discussions at work are actually on the rise. According to a poll conducted by the Society for Human Resource Management (SHRM) in October of 2019, 56 percent of American workers say that the discussion of political issues has become more common in the last four years, and 42 percent say they’ve experienced political disagreements in the workplace.

It is possible for those on opposite sides of the aisle to have civil conversations about political topics at work. But, when conversations get personal, trouble can easily bubble to the surface, sending morale and productivity into a nosedive, and compromising working relationships between team members.

And, what’s more, when discussions about political topics stray into the territory of protected classes like religion, gender, race, sexual orientation, family status, and age, they could be interpreted as harassment or discrimination by some employees, and that could present legal problems for employers.

Create a Culture of Mutual Respect

As a business owner and/or manager, it is your responsibility to create and maintain a workplace for your employees that is free from hostility, intimidation, and discrimination.

Since so many political topics blur the line between political and personal, even calm and lighthearted discussions about political issues between like-minded employees can be problematic if overheard by someone who stands on the opposite side of the issue being discussed (imagine a conversation about limiting immigration, the virtues of a border wall, or support for travel bans taking place within earshot of a Latinx or Muslim coworker, for instance).

That said, it may seem ideal to simply ban political discussions in your workplace, outright. But, not only would such a policy be nearly impossible to enforce, sweeping bans on what your employees can and cannot discuss could have a negative impact on employee morale. Plus, when conversations are relevant to employee wages or working conditions, they may very well be protected by law.

You can’t always control what people say, but you can address the impact of their statements on the workplace. So, instead of instituting a full-on ban on political discourse, most employers will be better off addressing the way that such conversations take place, rather than attempting to discipline the content of those conversations.

Admittedly, what you can and cannot legally control in terms of political expression in the workplace is a bit murky.

Generally speaking, private employers are not bound to protect their employees’ First Amendment right to free speech (employees of the Federal Government are still generally allowed to practice free speech at work, however).

There are some state and local laws that protect employees’ rights to engage in political activities. Most of those laws are meant to allow employees to support candidates or even run for office themselves while off-duty, and to restrict employers from imposing their own political leanings on their staff. But there are some laws that go even further in protecting political speech at work.

For the most part, however, business owners and managers do have some level of control over the types of discourse they allow at the workplace or online, as long as the limits they set do not violate their employees’ rights under the National Labor Relations Act (NLRA).

Under the NLRA, employees must be allowed to discuss issues that pertain to their wages, working conditions, hours, and their right to unionize and participate in collective bargaining (even if they don’t have a union or intend to form one).

So, if you happen to overhear your employees discussing a particular candidate’s stance on minimum wage, for instance, as much as it might drive you crazy, it’s likely that their right to have that conversation is actually protected by law.

You may be able to limit your employees’ ability to wear political buttons or t-shirts, or to post other visual political displays, but only so long as your state or local laws do not prevent such restrictions. You also have to be consistent in how you lay out and enforce any such restrictions.

For example, your dress code can require all employees to wear solid-colored tops and forbid any logos. What you don’t want to do is selectively enforce that type of policy.

Just recently, Whole Foods came under fire for banning Black Lives Matter masks, though they had allowed logos supporting LGBTQ rights. While they may have had the best of intentions, selective enforcement only breeds trouble.

In some states and municipalities, however, political speech and/or activity by employees is actually protected by law. Make sure you are familiar with the laws governing political expression in your area and work with an HR professional and/or a local employment law expert when looking to implement a policy limiting any type of speech or expression for your business.

Tips for Managers Dealing with Divisive Politics in the Workplace

When political conversations in the workplace get tense, it falls on you, the manager in charge, to ensure that things do not escalate to the level of harassment or discrimination by anyone involved. And, in the event that a conversation does get out of hand, it will also be up to you to defuse the situation and deal with any potential fallout.

That said, the best way to handle a political explosion in the workplace is to prevent it from happening in the first place. And, though you may not be able to prevent all political discussions from taking place, there are some things you can do to prevent political conversations between your employees from escalating to the point of hostility, harassment, intimidation, or discrimination.

Discourage your employees from making jokes or speaking sarcastically about the political situation and remind them that, regardless of their feelings about the election or politics in general, they still need to be able to respect each other and continue to cooperate to achieve mutual goals while at work.

With emotions running high on both ends of the spectrum, it will be important for your employees to understand that there is a fine line between expressing an opinion and saying something that can be construed as harassment.

Remind your team that, though each persons’ views on political, economic, and social issues may differ, everyone in your office is entitled to their own opinion and is to be treated with respect, regardless of where they stand on any given political topic.

It’s important that your employees be able to recognize that certain political conversations may be emotionally charged or personally triggering for some of their peers and colleagues. They also need to know that those differences of opinion are to be appreciated and respected.

Consider redistributing your harassment policies to your team to make sure they know where that line is, as well as how to report concerns to the appropriate parties, should an issue arise.

Though it’s generally not a good idea to discipline an employee for expressing a political opinion, you can discipline them for violating your company policies and causing disruptions in the workplace.

Also, make sure you are holding your employees to the same standards, regardless of which side of the issue they find themselves on.

For example, if an employee talks to a coworker about a recent political debate at the front desk where they can be overheard by patients or customers, you can and should address how this distracts them from their work and is unprofessional communication in front of clients without getting into the content of the conversation or the merits of the employee’s opinion.

Don’t expect that your employees will inherently know the difference between friendly banter and speech that might be construed as harassment, intimidation, or discrimination. And don’t underestimate the potential power of training employees on how to respect coworkers who hold opposing views.

Many states already require employers to provide harassment training to their employees. If you are in one of these states, this might be an ideal time to refresh that training for your team.

If your state does not require harassment training, any training you offer your team will likely be the first exposure to that sort of content for at least a handful of your employees. And, though it may seem like it should go without saying, it will be exceedingly difficult to hold your employees to your expectations of civility if they don’t know what they are.

As a manager or business owner, do your best to maintain an impartial stance and keep out of the political debate at work.

Even if you share the same views as one of your direct reports, resist the temptation to engage in political conversations with your team and avoid posting anything political on your social media accounts.

If you hear your employees discussing political topics, evaluate whether the speech is protected by the NLRA or laws in your state or municipality. Whenever possible, try to help steer conversations toward the broader scope of the issues being discussed and away from things that might apply directly to protected activities or protected classes of employees.

You can ban visual political displays in the workplace, including posters, banners, buttons, t-shirts, and political totes as long as you do so consistently across the board for all political symbols.

If you allow employees to display some political symbols but not others, then your policies could be considered discriminatory.

Further, keep political content off of the TVs and radio in your office, including those in the breakroom, to limit the opportunity for divisive topics to come up in the first place.

Though you will probably not be able to prevent all political conversations from happening at your workplace, you can take steps to limit the negative impact those discussions might have on productivity and morale.

When policing political conversations at work, be careful not to infringe on your employees’ rights to discuss their wages or working conditions as outlined by the NLRA. You’ll also need to be aware of whether or not political speech or activity is a protected right of employees in your state or municipality.

When it comes to political expression, rather than disciplining employees for what they say, it’s a much safer practice to address the way that they say it and/or the disruption it causes at work. Unless, of course, the “what” behind those statements can be interpreted as hostile or harassing to employees in protected classes.

Ultimately, your employees need to know that they still need to be able to get along with their coworkers, no matter their political leanings, and that the workplace needs to be harassment- and intimidation-free at all times for everyone on the team

Make sure your employees are aware of your company’s harassment and reporting policies, and that they understand what it means to cross the line between expressing an opinion and harassing or intimidating another employee.

Offer training on these topics, if needed, and make sure you are consistent with your enforcement of those policies for all employees, regardless of political affiliation.

Though this election cycle is bound to cause emotional reactions from people on both ends of the political spectrum, a little bit of foresight and openness can go a long way in keeping your team working together, no matter who finds themselves headed to the White House come November 3.