Homophonophobia (Yew No Its Reel!) and the Worst Boss Ever

This is a cautionary tale about possibly the worst boss and administrator ever, and the dumbest reason for firing an employee. It all starts with grammar. And eye don’t care who eye offend. Eye knead two speak out about homophonophobia.

OK, Snapping Out of It

Homophones sound similar but have different meanings, so they often differ in spelling. And as you can see from my paragraph above, the English language is packed with them. Whether it’s a question of there/their/they’re, to/too/two, it’s versus its, or countless others, IT’S enough to make any editor’s blood run cold. And if you had a fear of using homophones incorrectly, you would presumably suffer from homophonophobia.

And who most needs to learn about homophones? Here are the obvious candidates:

This last point is important, because it appears that an employee at a school in Utah, a school that existed specifically to teach English to students learning it as a second language, had the unmitigated gall to refer to homophones as… homophones.

I shudder to think of this blatant example of homophone use within an educational institution. The employee in question, Tim Torkildson, a social media specialist at Utah’s Nomen Global Language Centre, went so far as to actually publish an instructional blog post about said homophones, explaining the similarities and differences between ‘ad’ and ‘add,’, ‘ate’ and ‘eight,’ and other such words. In fact, we will get to this heinous post of his shortly.

Early Exposure to Homophones? (Stay Tuned, this IS an HR Story)

Now, word on the street among teachers is that teaching English-learners these subtle homophonic differences early on is key to helping us become more proficient when reading and writing.

A far less common and more idiotic concern, but one apparently held by Tim’s employer, is that blogging about homophones may give people the impression that you and your school are pro-homophone. And who KNOWS how that might get interpreted, right? After all, that sounds a lot like a very different sort of word — one that’s almost-not-quite a homophone. You could be erroneously accused of promoting a pro-gay but highly literary agenda!

At any rate, according to Tim Torkildson’s boss, the use and explanation of the word “homophone,” along with simple examples showing why common English homophones are important to learn, was not appropriate subject matter to be dealt with at the school. The blog content was therefore “the last straw” and considered to be a fireable offense.

(Can I just repeat the fact that Tim’s actual job, at this English-as-a-second-language school, was partially to explain the sort of thing he got fired for explaining? The nerve of some employees, doing their jobs like that!)

From an HR point of view, we recommend that employers give reasonable and defensible reasons for terminating employees. These reasons need to be based in fact. Otherwise, you risk the employee making up a reason for you, or worse, showing that your reason was nonsensical, and that you possibly fired them for some other illegal reason.

Sometimes your reason can be as vague as “not a fit.” Other times, it can be about unprofessional conduct or violating polices concerning safety or attendance. And who knows, maybe there were other facts involved in this case, but we’re sure not hearing about them. As an ever-cautious and risk-avoidant HR expert, I would be concerned that the employer’s stated reasons for firing Tim just don’t add up. And that can lead to trouble.

Here’s that original homophone post, so you be the judge. And here’s the Huffington Post’s coverage of the story. I personally think the wrong person lost their job.

Friendly Disclaimer: This information is general in nature, and the story is reported to the best of our knowledge. It is not intended to replace good counsel about a specific issue with either your attorney or your favorite HR Sherpa. 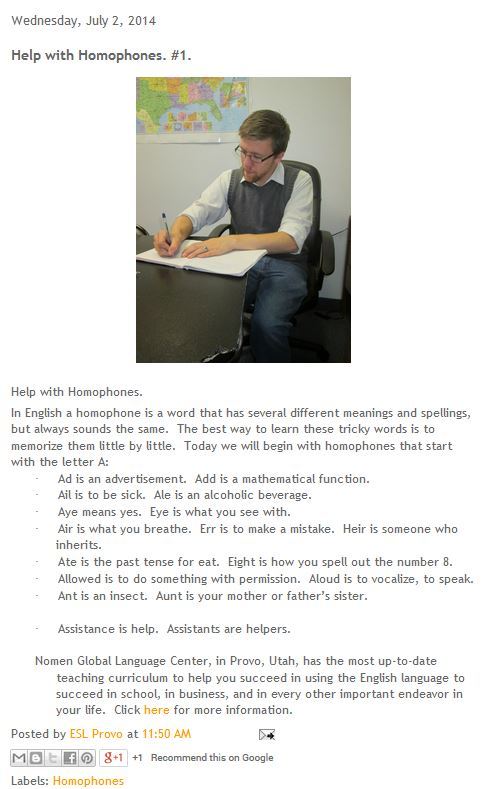