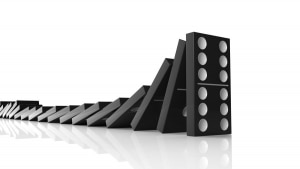 Employment laws are sometimes like dominos. Once one state passes a law, others tend to follow suit. For example, the first medical marijuana laws were passed in 1998, and now 26 states have legislation addressing the issue.

More recently, the first mandatory paid sick leave law passed in California in 2015, and now the trend is spreading like wildfire, impacting six states and at least 17 cities and counties throughout the country.

One trend we are currently tracking is pay equity legislation. These laws aim to close the wage gap between men and women, and take a variety of forms. Employers need to be vigilant about these laws, as they usually include steep penalties for violations.

This year, Massachusetts passed a landmark pay equity law. This legislation not only requires equal compensation for substantially similar work, but it also prohibits employers from inquiring about an applicant’s salary history until after a job offer is made.

Many other cities and states are bolstering existing pay equity laws or passing new legislation to require employers to compensate male and female workers equally. For example, Philadelphia now requires equal pay for equal work and also prohibits employers from seeking a prospective employee’s salary history from a current or former employer. Connecticut, Delaware, North Dakota, and Oregon have all passed laws addressing this concept as well.

This trend is definitely one to watch closely, as legislation addressing pay inequality has been proposed in at least 20 other states.

Friendly Disclaimer: This information is general in nature, and is not intended to replace good counsel about a specific issue with either your attorney or your favorite HR expert.

If you’re a healthcare practice owner or manager with questions about equal pay legislation in your state, give CEDR’s HR Advisors a call at 866-414-6056, or email info@cedrsolutions.com.